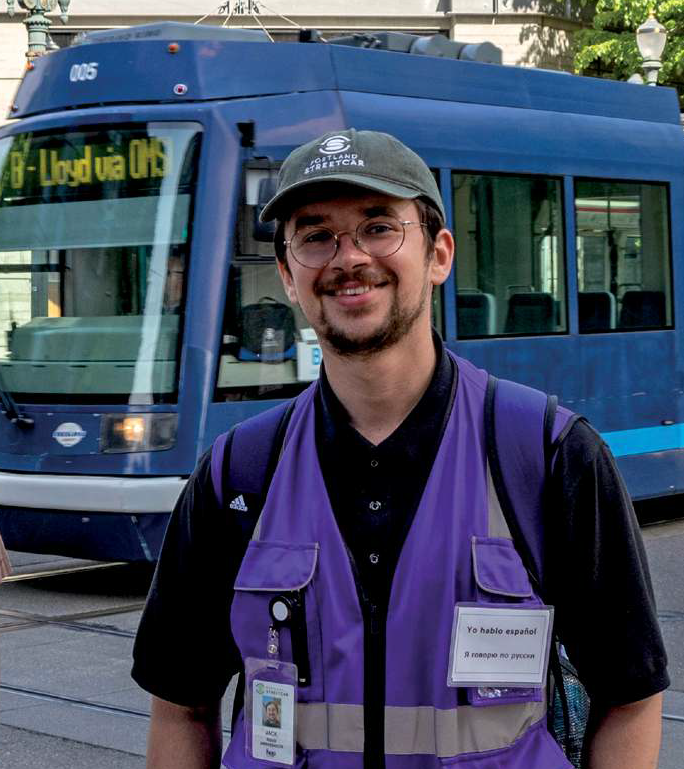 That’s a question that rider groups around the country are pushing agencies to reconsider, as we learned at the August 28, 2022 TRUST Meeting of the Whole.

Historically, many transit agencies have responded to perceived threats of crime by beefing up armed security patrols, even as they cut service for riders.

Yet rider groups in Portland, Oregon and Asheville, North Carolina, among other places, are campaigning for an alternative approach.

One resident called them “our guardian angels on the street.” Unfortunately, TriMet eliminated the program in Great Recession budget cuts in 2009.

Bus Riders Unite, a rider union under the umbrella of environmental justice group OPAL, has been advocating for TriMet to reinstate the program. This January, they prevailed on Portland Streetcar, a separate agency, to pilot a copycat program called “Rider Ambassadors.”

Dressed in bright purple vests, the Rider Ambassadors are hard to miss, and easily distinguished from armed security guards. They carry backpacks with water, snacks and hygiene products to help riders in need, and speak a total of six languages.

TriMet has given some ground to rider demands by launching an unarmed “Safety Response Team,” but riders criticize the program on multiple grounds. Among other things, they note, the TriMet team was trained by a former police officer with a record of discriminatory behavior.

“They’re still operating with their biases and their prejudices that are informed by racist policing,” says OPAL’s Maia Vasconez-Taylor.

For years, Asheville Rapid Transit has contracted with a private security company to police the city’s downtown transit center. In the fall of 2020, however, after the city launched an initiative to “reimagine public safety,” BBT pushed city staff to reconsider safety in transit, too, by funding unarmed emergency response professionals, trained in first aid and de-escalation, to help ensure safety at the transit center.

“The reimagining of transit safety would create a safer environment,” says Better Buses Together organizer Carmen Ybarra, “and be an example of the city’s commitment to the community.”

After months of conversations with city staff and other organizations, BBT managed to secure unanimous support for a one-year pilot program in which the emergency response professionals would supplement the security guards.

Thus far, however, the City has not allocated funding for the position. BBT hoped that money from the American Rescue Plan (ARPA) would be put towards the program, but this did not occur, and BBT is now looking at other opportunities, while continuing to petition the City.

Many thanks to Maia and Carmen for their work on these campaigns, and for taking time to present! Our next Meeting of the Whole, on “Navigating the Political Thicket,” will tackle the thorny questions raised by rider group involvement in electoral politics. Register at this link.